We all know beauty standards change but the beauty of Korčula island is timeless. The island is rather narrow, stretching in the east-west direction, and it is one of the biggest islands you will visit when sailing in Croatia. In the past, the island was known as “Black Korčula” due to the dense pine forest that it is covered with. Except for the beautiful Mediterranean flora (that includes diverse aromatic and therapeutic plants) and varied wildlife, what adds more to its charm are the narrow streets and interesting buildings in the settlements. Korčula is part of central Dalmatia and the position allows you to observe stunning sunsets behind the Adriatic. Even with all that beauty, Korčula is an island that is not as popular as for example, Hvar or Brač, presumably because it is more distant. This can be an important highlight for those who like to enjoy a more peaceful holiday but also visit one of the most gorgeous islands when on sailing holidays in Croatia.

Wine (among most popular are Pošip, Marastina, and Grk) and olive growing are the main occupations of the inhabitants, and dry-stone walls which embrace wine and olive groves make beautiful sights on Korčula.

The second most populous island of Eastern Adriatic, Korčula has eleven settlements, the main ones being the eponymous Korčula, then Vela Luka and Blato.

This is a town situated on the well-protected eastern coast of the island. Therefore, it is primarily a good place for safe mooring or anchorage. Although the two main harbors on the island (western and eastern harbor), both provide good shelter when sailing the central Adriatic, a slightly better option would be the eastern one, in Korčula town.

Other than its harbor being a good place for a boat, this town of Venetian origins is itself gorgeous. It is not called “Little Dubrovnik” for nothing, and we all know the beauty of Dubrovnik cannot even be given enough credit. 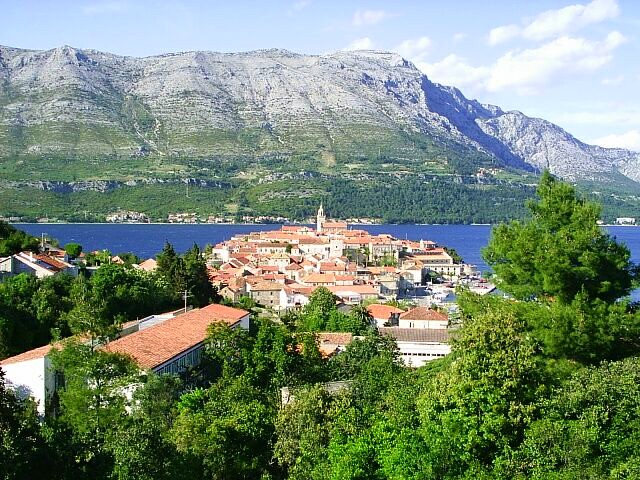 The view from Korčula town on the mountainous Pelješac peninsula

Korčula sprung up on a small peninsula that was connected to the mainland with stone stairways, nowadays one of the city’s symbols. 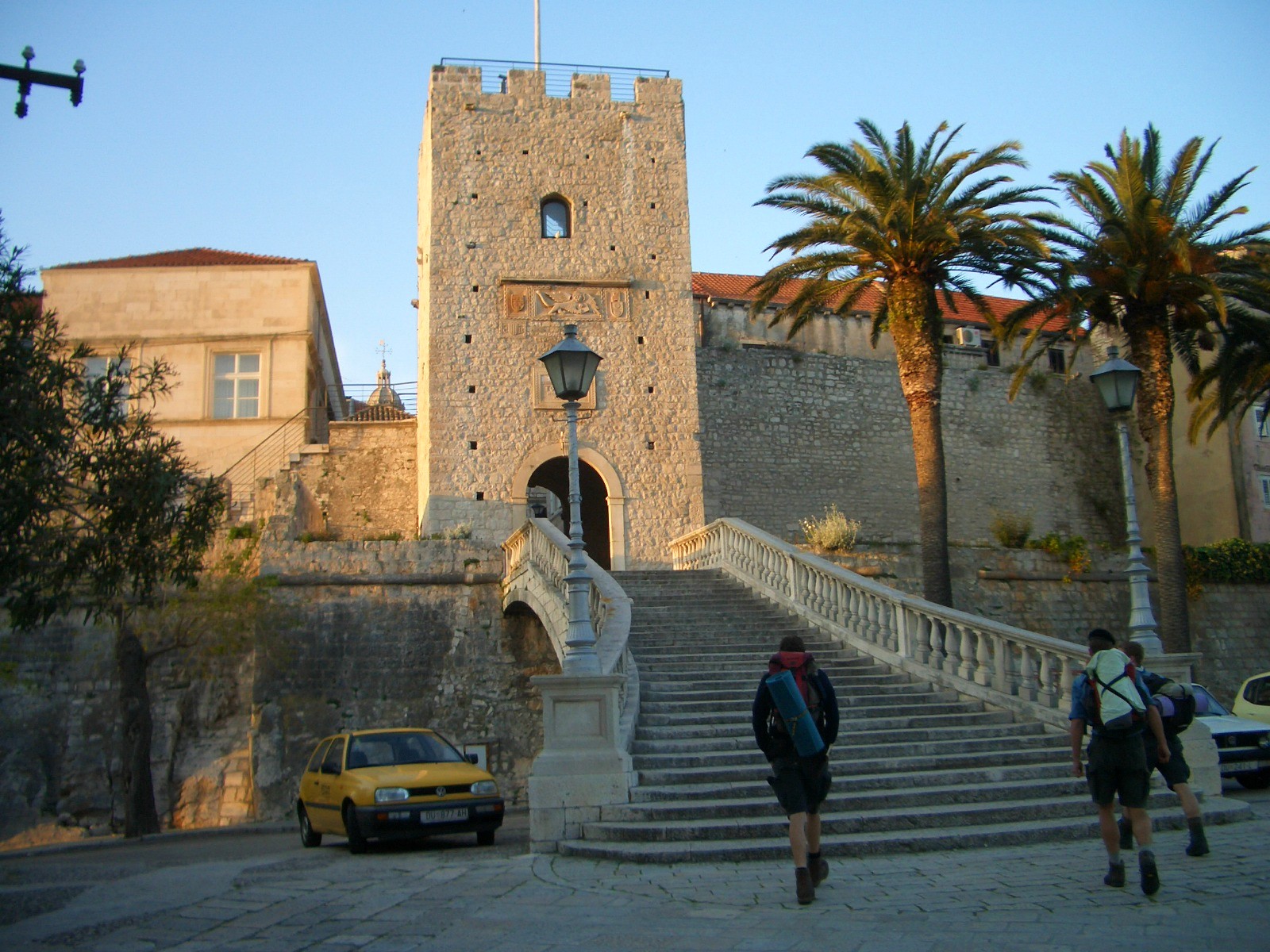 The famous stairways in Korčula, a town of Venetian origins

The town resembles Dubrovnik by being a fortified historic town, surrounded by old walls, with interesting street arrangements, medieval churches, palaces, and squares. 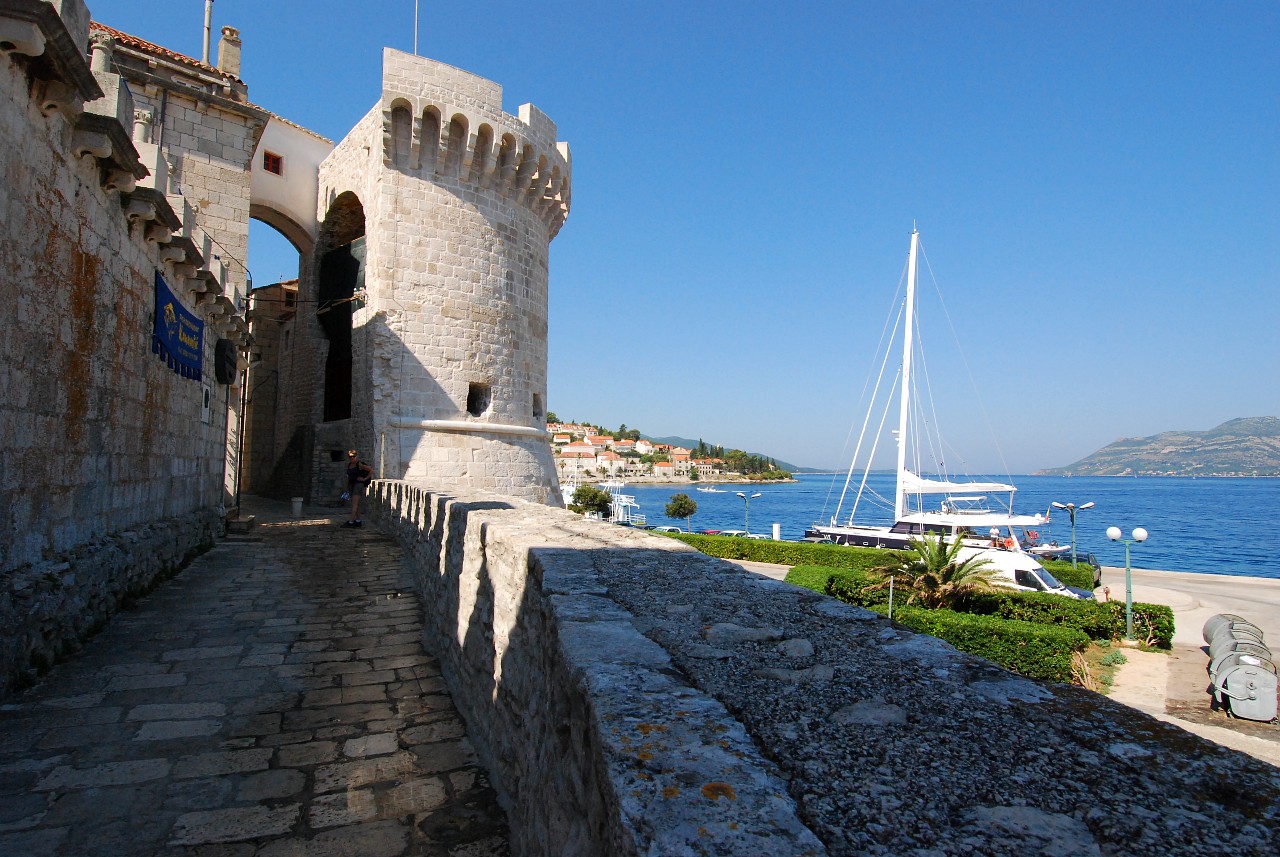 The most outstanding historical constructions of Korčula town are the Gothic and Renaissance Cathedral of St Mark, the 16th century Renaissance style Gabrielis Palace just opposite the St. Mark’s Cathedral, the Town Hall, and the 14th-century Franciscan monastery on Badija, a small islet in Korčula Archipelago located near Korčula town. Beaches on this little island are also a good idea for spending an afternoon when sailing in Croatia.

Something extra to enjoy in Korčula town are the beautiful viewpoints: make sure to visit the St Vlaho tower, and St. Antony’s hill by the road to Lumbarda village, only 30 minutes walking away from the center. 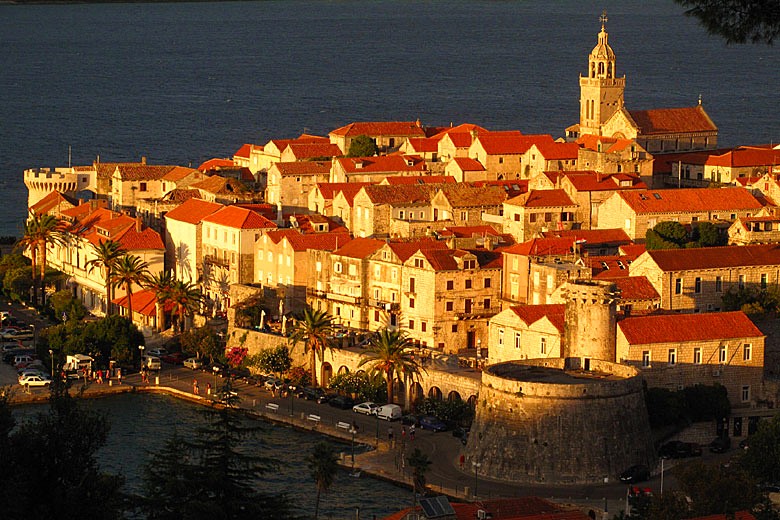 The beauty of Korčula town in the late afternoon

When talking about the historical attractions of Korčula, the town’s traditional sword dance Moreška should not be forgotten. It is part of the island’s soul ever since the 17th century, if not since before. Together with other traditional sword dances on Korčula island, it is usually performed weekly during the summer season, when the audience is bigger.

Among the buildings in Korčula town, the most famous is the supposed birth house of Marco Polo (world traveler, explorer, and writer).

A deep and well-sheltered bay Uvala Luka is definitely worth mentioning when talking about mooring/anchoring near Korčula town. From there, you can take a short walk to the town or take a break in one of the bars and restaurants on the shore of Uvala Luka.

Vela Luka (or Great Harbor in English), at the end of a large, deep bay is the main port of entry, the biggest and the newest settlement on Korčula island. It is located on the opposite end of the island (western part) compared to Korčula town, and it is a safe harbor and an excellent starting point to explore the other part of the island when on sailing holidays in Croatia. 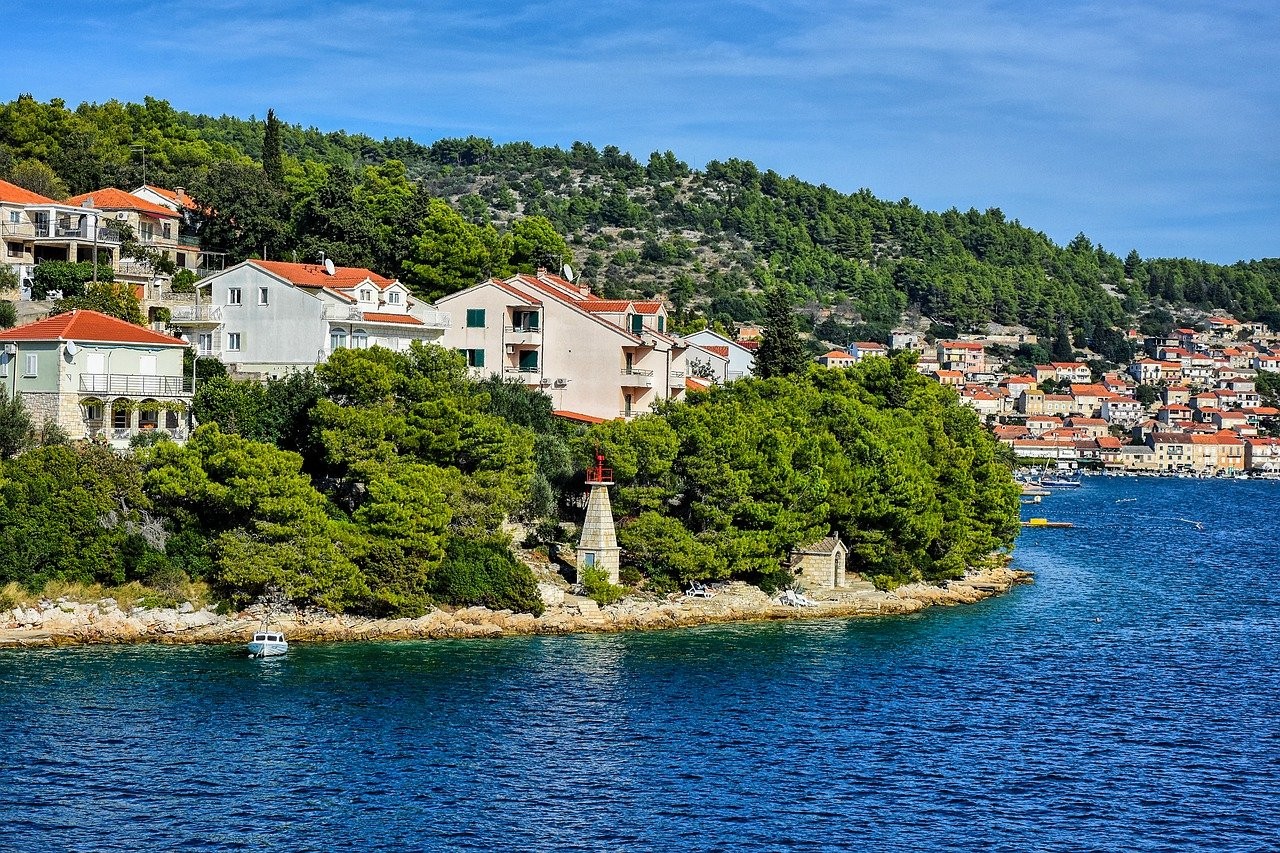 Vela Luka, famous for health tourism, is one of Croatia’s sunniest places and its climate is indeed beneficial. In addition to this, in Vela Luka you can also visit the health and rehabilitation center, Kalos, opened in the 1960s in Kale cove with beneficial/therapeutic mud and water.

This picturesque Mediterranean place is more peaceful than Korčula town; however, there is no shortage of charming cafes and restaurants with local cuisine.

One of the most important prehistoric finds in Europe, both cultural and historical heritage, Vela Spila (Big Cave) is the main attraction in the settlement. It is located on a mountain, and it is a hideout that was inhabited already in Neolithic Period. You can get to the cave by car or you can go walking over the hill and enjoy panoramic views. 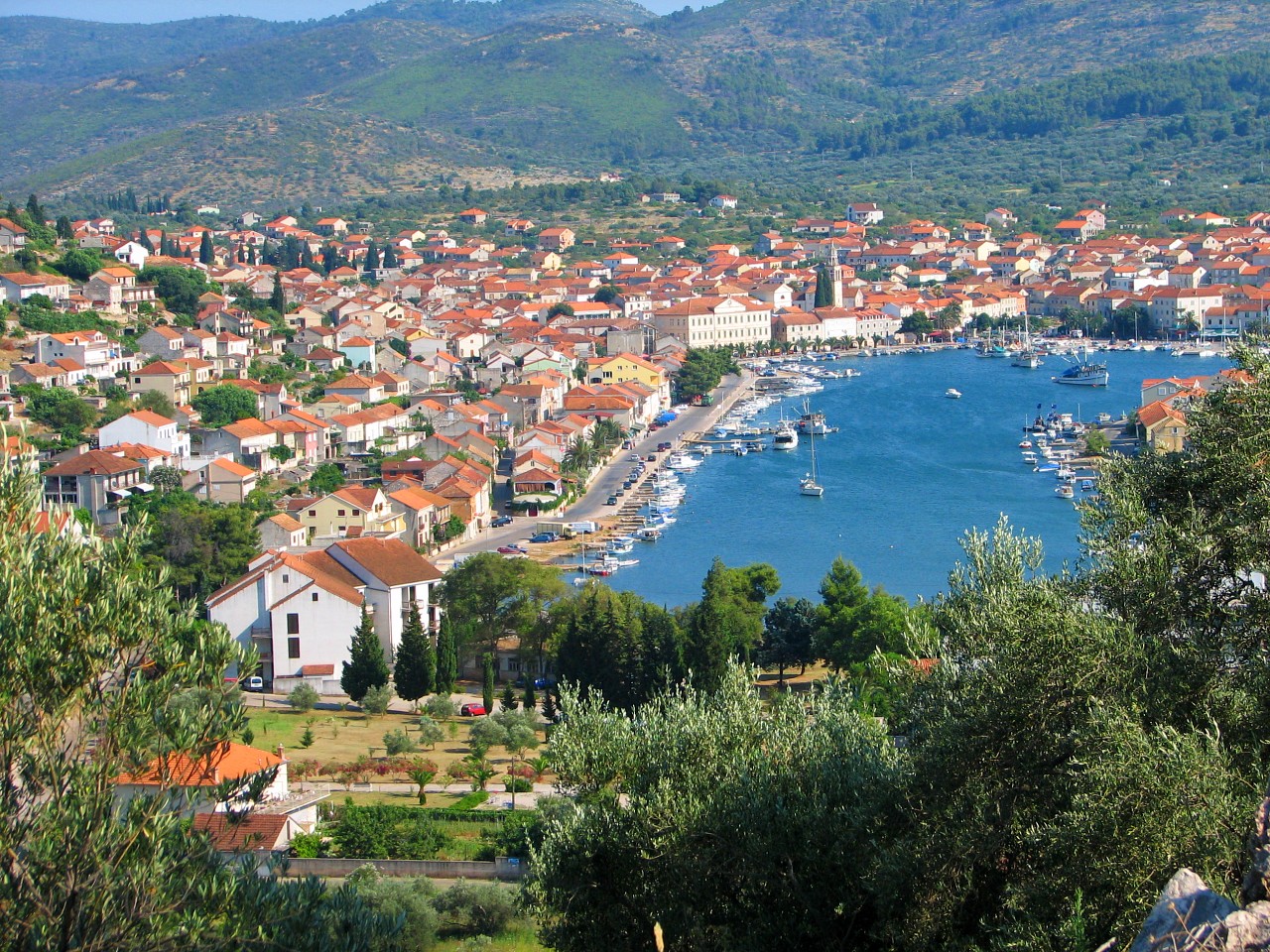 View over Vela Luka from the hills

A very interesting settlement beautifully built in the middle of the island on several hills that surround a green valley.

Regarding the heritage of Blato, the building that stands out is the Middle Age church of All Saints located in the town’s old center. What further graces this part of town is the bell tower built in the 17th century next to the church and the 18th-century Baroque loggia. This place also has its traditional sword dance – Kumpanija.

In Blato, you can find a bank, a medical center, as well as several shops. It has modern buildings, but many older stone houses and paths as well, and a long promenade of lime trees, Zlinj, one of the attractions of Blato settlement. 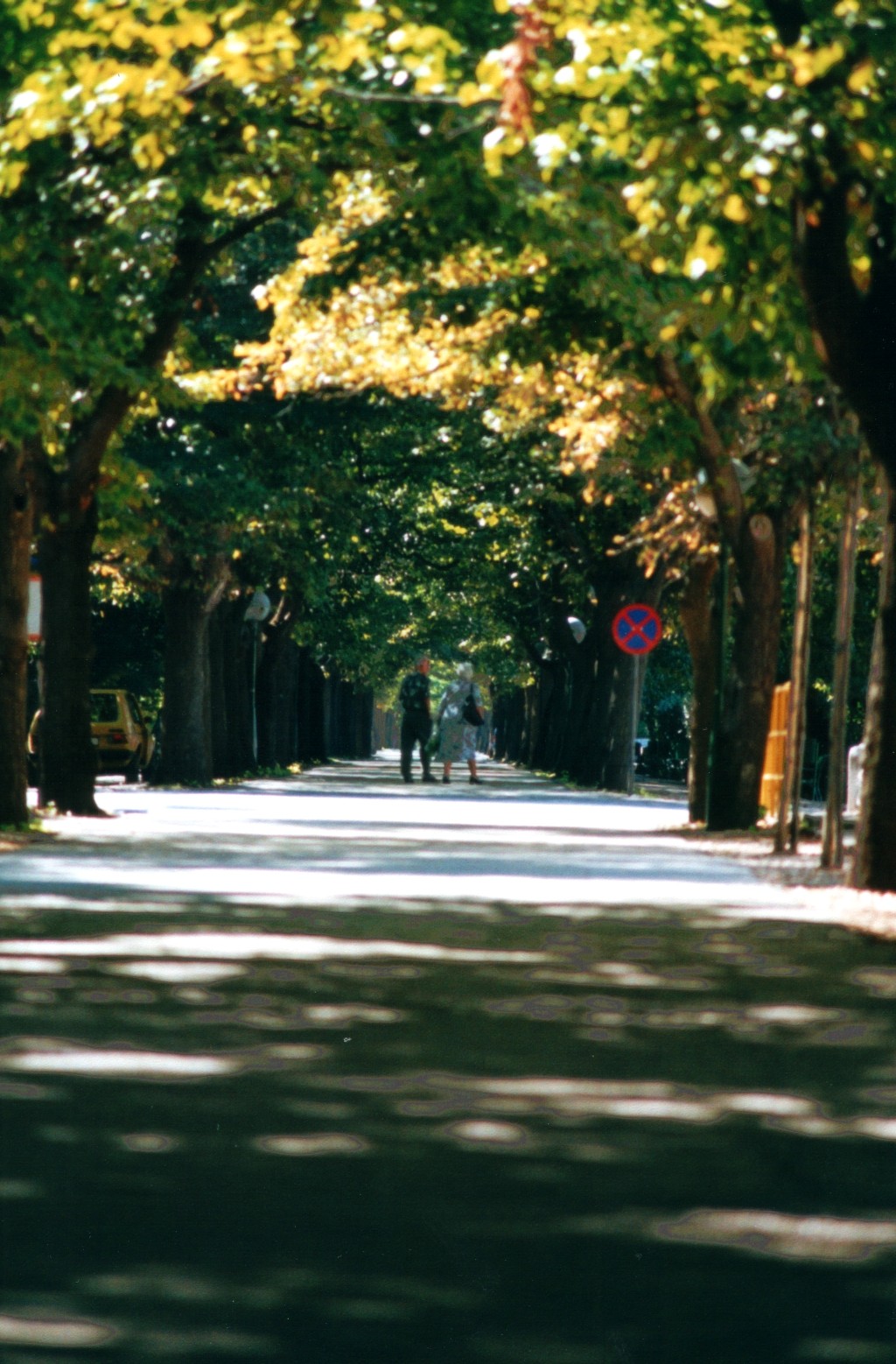 The nearest is the Prigradica harbor on the north coast, from which you can follow an asphalted path and reach Blato. The settlement can also be reached from Korčula town following the islands’ main road. 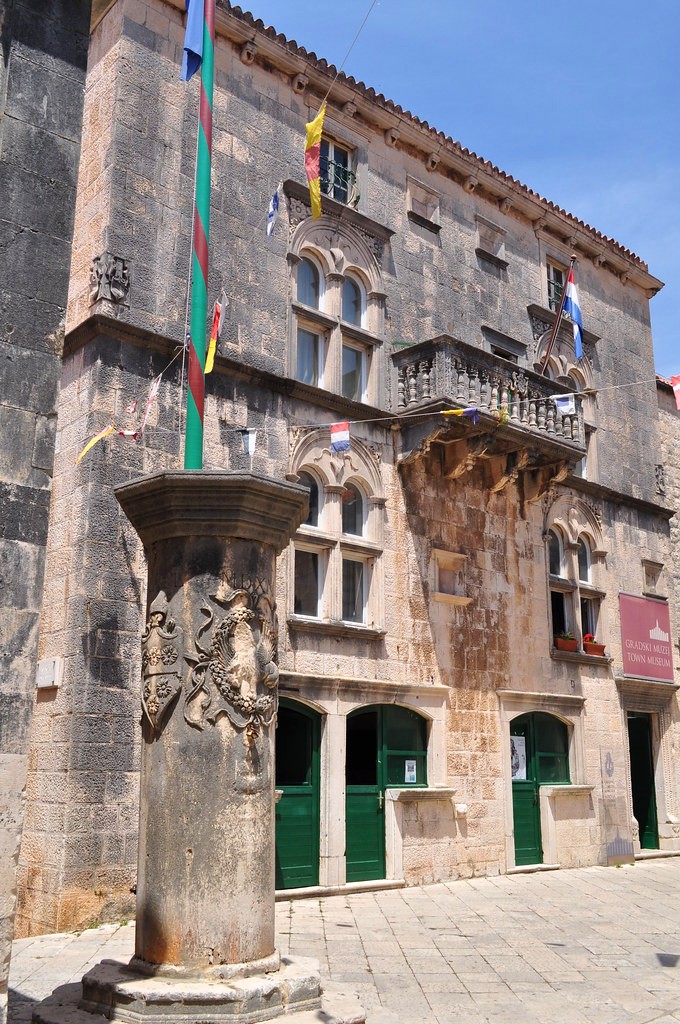 The famous museum in the ancient Gabrielis Palace

We always recommend consulting Tripadvisor to find the best restaurants.